Just in time for Christmas! This set of images is devoted to some of the goings-on of Santa and "Santa Claus Town" in 1916, as pictured by a combination of drawing and composite photography. The context of these is unfortunately unknown; they were deposited with the British Library to register their copyright, indicating commercial use, but what that use was I do not know. The images fortunately do come with captions--some of which only raise more questions.


"The palace bears." Of course Santa keeps polar bears in his palace! Source

Today another jaunt into ephemera. You know those vintage postcards with the big tacky letters spelling out a place name, each filled with pictures? I have to admit, growing up I thought those were just made-up, simply kitschy takes on past trends. I still find it amusing that they're absolutely not. They were a big thing for a long time--every random, tiny little American town had one. Like much of the popular art summarily dismissed as kitsch, their tackiness to modern eyes and adherence to format conceals a variety of individual takes and creative flair.

Postcards from the mid-20th C, drawn from the endlessly rewarding postcard collection of the Boston Public Library.

A selection of stunning early to mid-20th century airline posters, from a collection donated to the San Diego Air and Space Museum.

Amidst all the misery and horror of World War One, it's always so nice to get glimpses of the breaks the troops got from all of it. In this post, photos of soldiers swimming, bathing, and/or playing (usually all three) in the water during WWI. They look like they consider it the best thing ever, which, in that period of their lives, it probably was. I'm glad they got it.

Note: Most of these fellows were not at all shy about stripping all their clothes off for a swim, so there is some nudity ahead!

British soldiers splashing in the water at Corfu. Source

Email ThisBlogThis!Share to TwitterShare to FacebookShare to Pinterest
Labels: fun, World War One

Leslie Jones was a Boston photojournalist, working for the Boston Herald for 39 years in the early to mid-twentieth century. He (and his friends) also really, wonderfully, liked taking silly pictures.

Jones and a young fellow photographer in just a normal handshake, 1936. Source


Jones getting action with a mannequin, 1935. Source

Jones and pal posing for the camera. Source

In the days of the 1930s, when 'fitness' and 'cigarettes' were yet opposed to one another, the fitness-concerned man or woman had to look no further than their nearest pack to find a handy-dandy workout routine. This particular set of 50 cigarette cards were each printed with an exercise, illustrated on the front and described on the back. There were 25 each for men and women--because, of course, men and women couldn't possibly benefit from the same exercises. I'm not a fitness-concerned woman (nor a smoker) so I can't vouch for the effectiveness of any of these exercises (though some raise my eyebrows), but, when combined with early twentieth century gym clothes, they sure make for some interesting visuals!

The backs of the cards, with the exercise descriptions, are accessible via the source links. The full set is here.


For Slimming the Waist. Source


For the Leg Muscles. Source

The Crosses, Row on Row

One hundred years ago yesterday, a young Canadian soldier named Alexis Helmer was killed at the guns during the Second Battle of Ypres. One hundred years ago today, his good friend, a Canadian doctor named John McCrae, was moved to set down those evocative lines, "In Flanders fields, the poppies blow...."

As McCrae himself wrote of the battle, afterwards:

"The general impression in my mind is of a nightmare. We have been in the most bitter of fights. For seventeen days and seventeen nights none of us have had our clothes off, nor our boots even, except occasionally. In all that time while I was awake, gunfire and rifle fire never ceased for sixty seconds, and it was sticking to our utmost by a weak line all but ready to break, knowing nothing of what was going on, and depressed by reports of anxious infantry."*

McCrae was situated at an advanced dressing station, called Essex Farm, the first point of care for wounded soldiers, just behind the front line. Since many men sadly did not make it further, advanced dressing stations were usually joined by hastily constructed cemeteries, Like most front line cemeteries, the crosses were makeshift, the layouts haphazard. After the war, the crosses were gradually replaced by the carved headstones in place today. McCrae's "crosses, row on row" exist only in photographs.

For the centenary of a poem that's struck a chord like few others, a collection of those photographs of wartime cemeteries, in Flanders fields.


A British officer and his dog at Wavans War Cemetery (which includes the grave of top British ace James McCudden), 1918. Source

Email ThisBlogThis!Share to TwitterShare to FacebookShare to Pinterest
Labels: remembrance, World War One

Regular blog readers might be aware of my April tradition of making a blog post for my sister's birthday. Now, regular blog readers are probably also aware that I haven't been particularly with it post-wise lately (honestly, the only reason I got the San Francisco Earthquake one together was that I'd been sitting on the pictures for months until the right date, and only realized it was that date that morning!). So, well, this birthday post is a bit late. But I'll admit....so was her actual present!

Since the sister looks in Southern California, for this year I took a dive into one of my all-time favourite collections, the Boston Public Library's collection of linen postcards from 1930s-40s America, to present this set of wonderfully colourful, semi-photographic postcards from the land of sunshine.

Enjoy, sister, and all!

Long Beach, back when it apparently had a cool roller coaster. Source


A world premier at the Cathay Circle Theatre, LA. Source

The devastation of the great San Francisco Earthquake, on this day in 1906, is extensively photographically documented. There are thousands of monochrome photographs, some of which I've shared before, printed in newspapers or mass-produced as postcards. There are even a few true colour photographs, made with a rare early process.

The images in this post are stereoviews of post-earthquake scenes, photographs translated into low-quality half-tones, and then hand-tinted for commercial sale. I find them fascinating as an insight into the desires of early 20th century consumers of photography--even in documentary photographs, and even for photographs of a tragedy, applied colour was a selling point.

A special edition of the wartime pets series! As we've seen in past posts, soldiers are very, very fond of keeping pets and mascots of all kinds, from the expected dogs and cats to pigs, goats, and foxes. Out of all the unusual pets, perhaps the most surprisingly popular was the kangaroo (or wallaby). Australian soldiers played with them at home, then took them along on journeys to far-off fronts. Foreign troops stationed in Australia were also keen to seize their chance of kangaroo adoption. I don't know if they do make good pets, but these fellows certainly seem thought so! 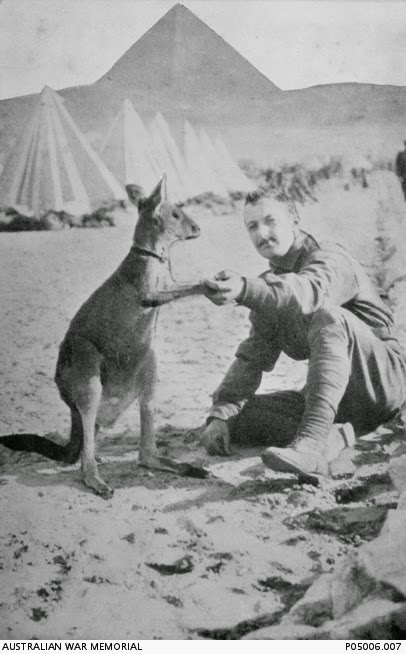 An Australian soldier with a pet kangaroo near the Pyramids, Egypt, about 1915. Source 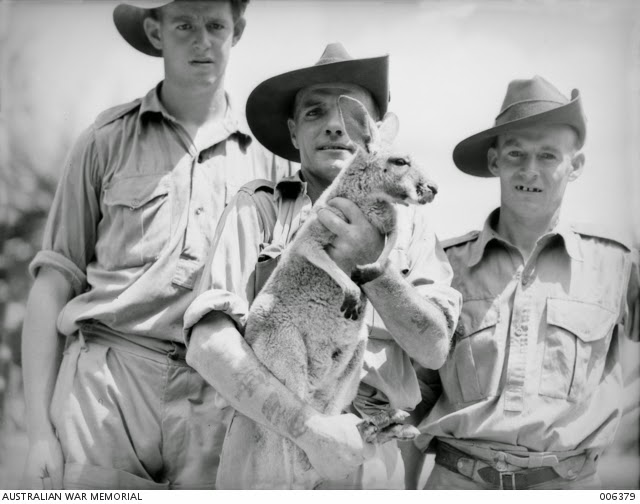 Soldiers with a kangaroo in Malaysa, 1941. Source 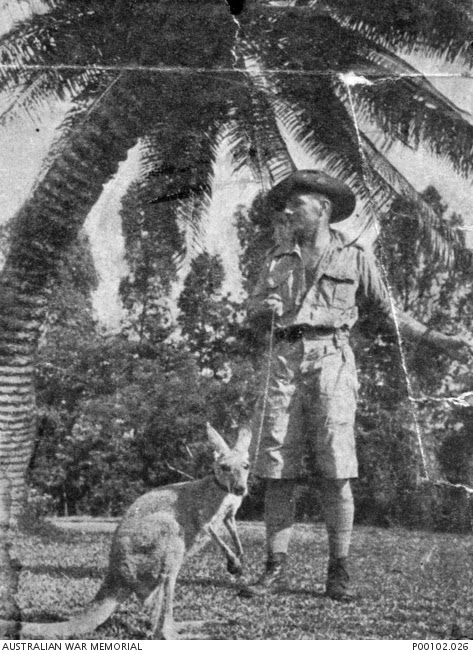 A soldier with "Joey" the kangaroo in Malaya, 1941. According to the caption, he was smuggled in a box labelled "Medical Supplies." Source

A quick, fun set! I don't have a tremendous amount of context for these photographs, which come from what appear to be two sets, in a collection held by a small Ontario museum. In one set, a bunch of male and female friends play around with bicycles, bonnets, and occasional musical instruments. In the other, a group of five fellows adopt silly poses in swimsuits, some of which are women's suits. All are taken in 1897, in Huron County, Ontario, by a professional photographer. What, exactly, is the story? Who knows, but they're great.


A pile of friends and instruments in the park. Source

A delightful set of photo postcards made in Norway in the 1960s. Wonderfully, nearly all the cards in the set include a cheerful red car (of various makes), merrily making its way through the Norwegian countryside. The postcards thus evoke a series of personal snapshots of one person's road-trip (better snapshots than anyone could actually take!). Of course, in a sense, they are: the car(s) belonged to the photographer.

Since the photos' captions are only in Norwegian, which I don't speak, I've pasted them in full, so as not to mix up place names and descriptions.

What better day to have a dip into my dear collection of 1920s/30s French romance postcards? For the uninitiated, the genre is characterized by its embellished scenes of idealized romance--perfect for Valentine's Day! So, here is a selection of passionate (or at least passionately posed) kisses. Cynics can come back later.

I've included the backs, because most of these postcards, especially the more romantic ones, were in fact sent between couples. So there's the real romance in addition to the staged, a meltingly lovely combination.

The Joy of Snow Shovelling

It might not be fun, but at least the misery has been shared over the centuries....

The autochromes come from the collections of Te Papa, the national museum of New Zealand, in Wellington, which is terrific museum all round.