Kids (and some adults!) on a variety of old playgrounds.

Wing walking, of course, is one of the crazy stunts pilots got up to in the earlier days of aviation. It is still done sometimes, but with wires and straps and thing to make sure the practitioners won't die. Back in the days these photos were taken, there were no such safeguards. Pilots would simply climb out of their cockpits and stand, sit, or hang from the wings or fuselage. This kind of thing was very popular in stunt shows of the 1920s, though it was being done for fun much earlier.

The majority of these photos depict an American barnstormer of the 1920s named Carter Buton, whose antics are documented in scrapbooks temporarily held by the San Diego Air and Space Museum. However, the albums of WWI pilots-in-training yield plenty of examples at least as daring, done just for the benefit of fellow pilots, and/or just for the hell of it.


Twin boys "who milk their cow everyday to get milk for their cats," Llanderfel, Wales, 1959.  Source

We all know how difficult it is to get a good group portrait-- the more people there are, the less chance there is of everyone looking nice, or even just not blinking. When you add in the desire for a nice composition, well-lit, with a variety of engaging poses, there doesn't seem much solution except photoshop.

19th century photographers agreed. Why try to get a good group portrait when you can crop together a bunch of nice portraits taken separately? So some of them--most notably Montreal photographer William Notman-- did exactly that. Notman would taken dozens of individual, studio portraits, then cut each figure out and paste them onto a painted backdrop. More paint was used to get light and shadow and contrast just right. At this point, the image would look like this, and be very large (I've been lucky enough to see examples in person; the ones with dozens or more figures are easily 3 by 6 feet). This creation would then be photographed itself, so smaller, more "photographic" images could be printed and given to all the persons involved. (The Montreal Musee McCord Museum, home to Notman's archive, has a much more detailed write-up, if you are interested).

The final results are a strange sort of hybrid, somewhere between photograph and painting, almost uncannily in their resistance of categorization. Though these images have been digitized in black-and-white, most of the photographs are albumen prints-- dark purple and cream when first printed, usually brown and yellow today, after deterioration (as can be seen in the final image). 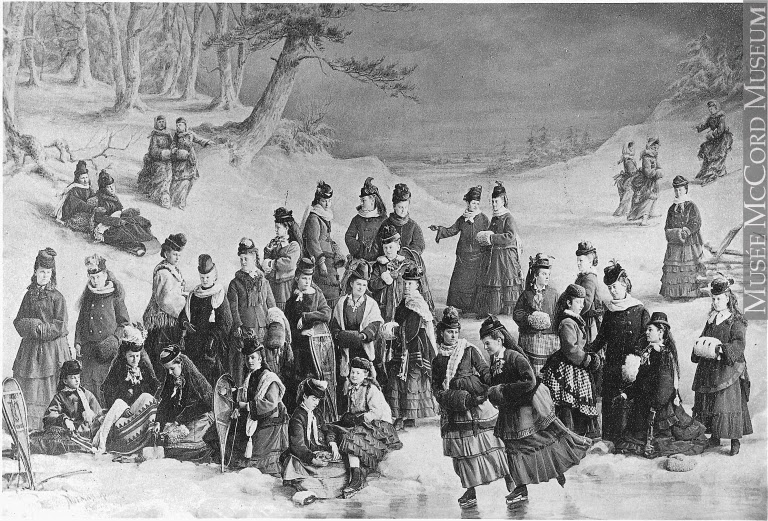 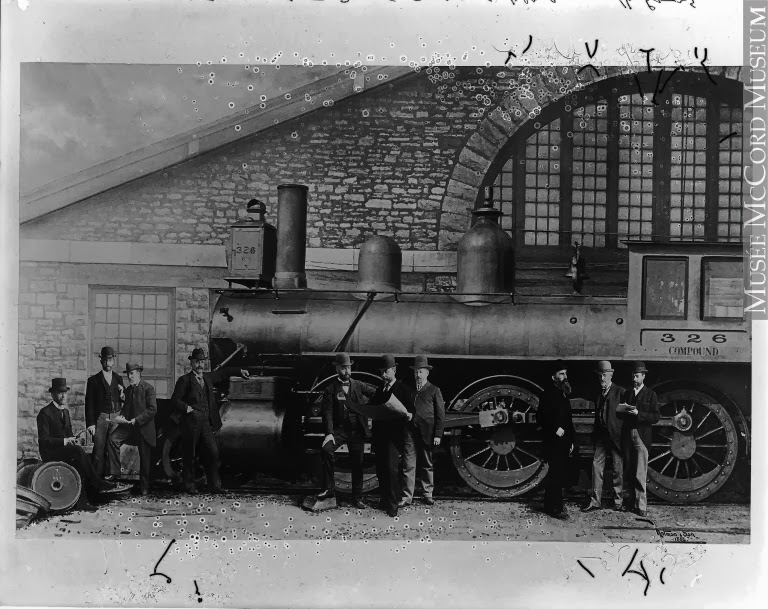 For the first post of the blog's fourth (!) year, something totally unexpected and totally delightful. This is the blog's second post featuring cigarette cards from the collection of the New York Public Library. The subject this time is species of butterflies and moths found in the British Isles... if butterflies were stylish ladies of the 1920s.

I have no other context for this. The wonderful NYPL shares the backs of objects online as well as the front, so if you follow the source links you can look at the backs of cards to read all about the species of butterfly--without any mention of the flapper part. It's pretty great.

Wow... today The Passion of Former Days is three!! I cannot believe how the time has flown, nor how much success this blog has had, nor how wonderful you followers are. This blog has been literally life-changing; that launch day three years ago led me into the field of photographic history and the master's degree I am getting frightfully close to completing. Thanks to this blog I've made cyanotypes and taken photographs with a 1920s Vest Pocket Kodak and handled daguerreotypes from the first couple years of photography's existence.

Thanks to the aforementioned masters and particularly work on a thesis on the deckle-edge in snapshots, I haven't had enough spare brain energy to think up anything good for the anniversary, though, of course, general good stuff is upcoming. So, today's post is simply a hodgepodge of random photographs from the Flickr Commons (the initial source of inspiration for the blog) that I've always really liked but never had a place for in a formal post.

Once more, thank you all!!

A group of people in party dress posed in a fake boat, Australia, ca. 1940. Source

Another collection to add to the rounds! Wellcome Images is a part of the Wellcome Collection, a terrific, quirky-yet-intellectual museum located in London (I highly reccomend a visit--it's free, too!). The site encompasses a huge number of photographs, "with themes ranging from medical and social history to contemporary healthcare and biomedical science" (Source). While on the one hand it is a commercial image library, specializing in medical images, they've also recently released a large number of historical images, available for free creative commons use. This is what we like to hear!

Anyway, so these are the fruits of my first jaunt into their holdings-- some terrific health and safety posters created by the British Royal Society for the Prevention of Accidents (which apparently still exists under that great name). Unfortunately, as this collection is image-based, very little contextual information is given, not even dates. Visually they look quite a bit like WPA posters and WW2-era British posters, so my guess is late 1930s to late 1940s, but I'm not at all a poster expert. Mid-century, almost certainly. 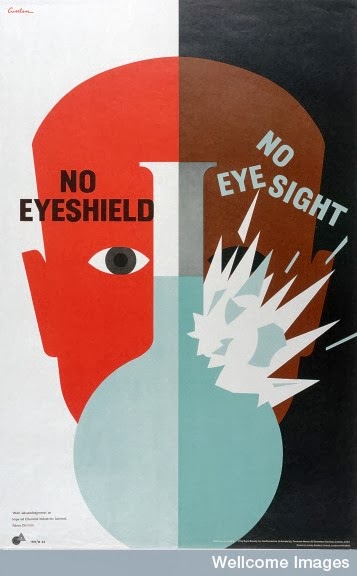 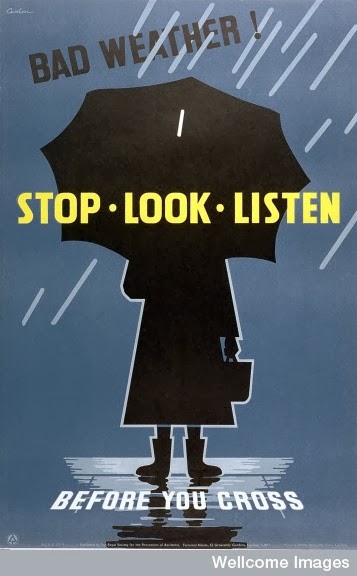 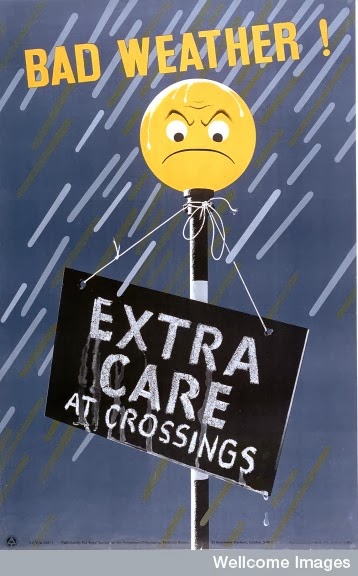 An assortment of early film stills/ production photographs from this blog's buddy the New York Public Library. Very little information can be found about most of these films (I've included links for the rare exceptions); probably most of them were lost a long time ago, like thousands of other early films. I find it quite interesting, really, to get this one moment (or a couple moments, for films with more than one photo) and nothing else, leaving the rest of the story to your imagination.

As noted,  photos come from films released 1912-1915 (I'm not sure why these specific dates, exactly; the NYPL sadly has no blurb about their selection (of about 100; this, of course, is my selection from their selection!)).

As you might know, sterograph cards were a hugely popular thing in the later 19th and early 20th centuries. These cards use two photographs taken from slightly different angles to produce a single image with a 3-d appearance, when viewed through a viewer (or by someone who is good at Magic Eye). However, the concept of stereo photographs was around from the very beginning. Daguerreotypes are quite interesting to view in stereo-- they are a) very very detailed, so the 3-D effect is especially profound, and b) essentially on mirrors, so extra work is needed to get a proper view. Some places, such as the studio of Southworth and Hawes, created whole installations where daguerreotypes could be viewed in stereo. In the mid 1850s J. F. Mascher invented a special type of daguerreotype case that could be folded out into a viewer (though, speaking from experience, it still takes a bit of fiddling to get the right angle of light). These days, the 3-D stereo effect is also often hard to get due to deterioration; one side may be more tarnish or dirty than the other, ruining the effect. Still though, they look neat!

(By the way, one of the most common uses of the stereo daguerreotype was for pornography. Unfortunately I've yet to find a public collection with any of these online... but thought you'd like to know!)

Portrait of an unidentified woman. Source

A Day in Hyde Park

Photographs of people enjoying the spring in Hyde Park, London, 1951. By Cornell Capa (brother of Robert).


Couples cuddling beneath the trees in the park. Source


A nap in the sun. Source

I feel I've said everything I have to say on the topic in the last four posts from this series; essentially, I absolutely adore photographs depicting men (and sometimes women) at war with the pets and mascots that were more common than we realize. I feel it is so humanizing and so touching--tender moments in difficult times.


Nanny, the pet goat of a Canadian Mobile Veterinary Section, takes a cigarette from an officer, 1917. Source